January 24, 2014
As is our annual tradition, we invited a number of our friends who are also cartoonists, comics publishers and editors to tell us what their favorite comics of 2013 were. We'll be publishing them all over the next few weeks.

BEST COMIC
Gagz by Lauren Weinstein (blog comics)
I have loved watching a part of Lauren's work reemerge that was present in Inside Vineyland, her first book, printed in 2002. At that point the comics had a young energy, often dealing with high school memories and social satire. Like Lou Reed when he wrote New Sensations, detailing his relocation from NY's 1970’s lower east side to 1980's New Jersey's suburbs, she meditates on the experience of becoming an older, less urban, more nuclear family-oriented figure, and she does it without diminishing the honesty and originality displayed by her early work. She tackles these themes with the same kind of irreverence and psychotic glee which embedded her earliest cartoons with the unpredictable and surreal, satirical energy of a careening pinball. Somehow, she's become able to reemerge from a period where comics took a back seat to the priorities of day to day life, and these bizarre, unique, blunt, edgy comics are some of the results.

In one of my favorite gagz, she shows a husband and wife, the man is playing Xbox late at night and the woman stands at the doorway looking suddenly infirm and billowy, wearing her underwear.

“You waited too long, and now look what’s happened” it says at the bottom of the frame. The woman looks like her body seems to be unraveling at a molecular level or melting and is shaded in away that makes it look as if it were slightly glowing, as if a star lay dying within. Like that suppressed star, the comic possesses so much rich meaning under the surface, so much possibility, where in the hands of most other artists it would just be almost a groaner about marriage.

These comics all say things no one else says about middle class existence, often achieving an amazing balance between horror, serenity and humor.  Stylistically, they are drawn with a perfect combination of clarity and I-don’t-care panache. And that’s why I award her this special handmade ceramic crown for her to wear. Hope you keep 'em up, Lauren 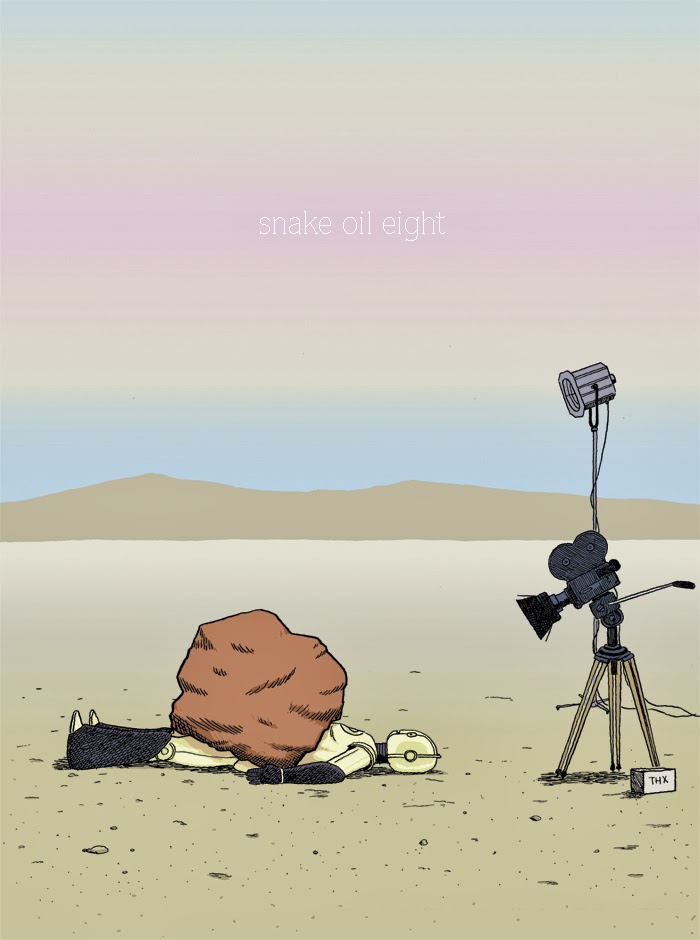 BEST CONTINUING COMIC
Snake Oil 8 by Chuck Forsman (Oily Comics)
I was inspired by this comic a lot. I also ended up creating an exercise for my comics students about story structure inspired by its construction, where every page is a different moment representing seemingly random points in the protagonist’s life. The hero is an actor known for portraying a C3po-like robot in a Star Wars-like movie. There’s an early scene where he accidentally cuts off a stage crewmember's finger when it gets caught in the inner elbow joint of his metal suit. It sets the tone right away for a story about a toxic person who figuratively maims everyone around him, ending up as alienated and dehumanized in real life as a robot outsider might be, cut loose from its science fiction mooring.

BEST LARGE FORMAT (TIE)
Love Wins 12 oversize newspaper by Jason T Miles (Profanity Hill Press)
Xeno Kaiju oversize newspaper comic by Pat Auliso (Yeah Dude Press)
Jason has a perfect touch with his thick Graphic line that always feels like its got a depth that is suggested by some invisible hand, some invisible beauty that I can't quite identify the source of. Pat's Godzilla-like comic shows off his rare unique combination of detail and bombast.  Some of my favorite work by him and that’s saying a lot. These two comics should get married, as a metaphor for cartooning's global spirit of friendship. 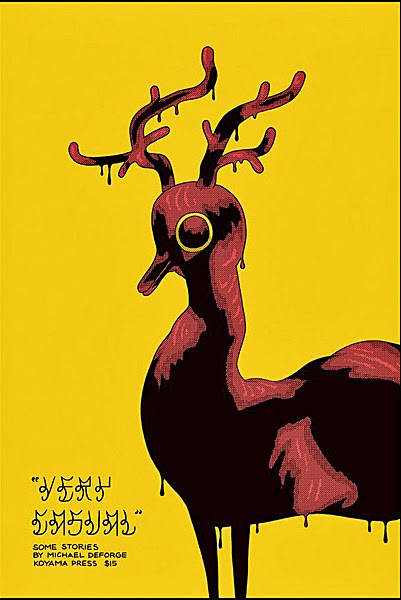 BEST VIOLENT COMIC
Michael DeForge's Very Casual (Koyoma Press)
I like work that has a lot of violent energy, that’s why I like DeForge’s stuff. Same Reason I like Marra, Josh Simmons, Corrine Halbert Heather Benjamin and Johnny Ryan, same reason Dick Tracy is one of the greatest comics ever. 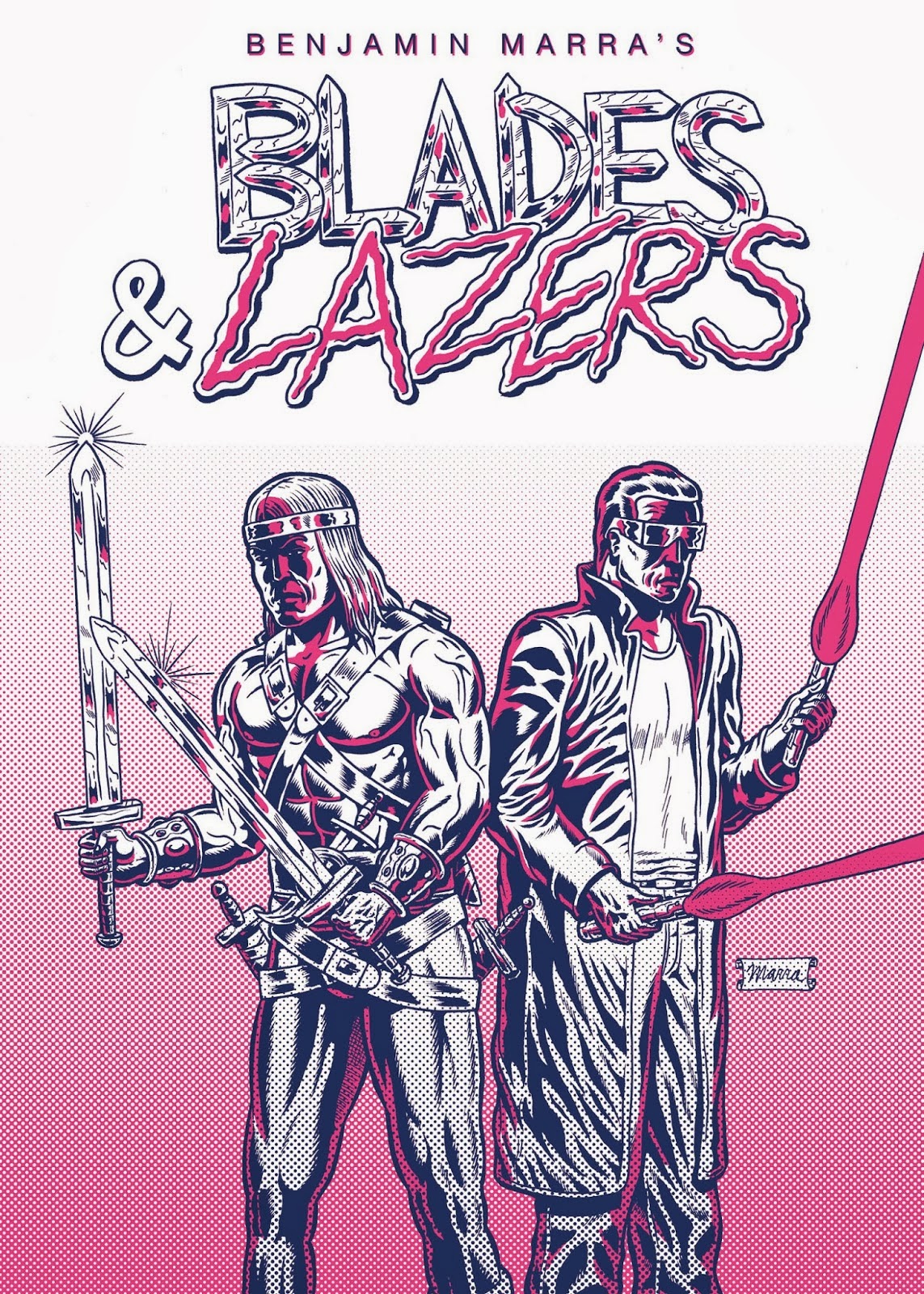 BEST SMALL FORMAT
Blades and Lazers by Ben Marra Ian Harker's Sacred Prism imprint)
This book has got the same kind of perfection that an early rock song has, simple and percussive, and so hooky that you can replay it by heart after one read.

BEST NEWSPAPER COMIC
I enjoyed reading a collection of Garry Trudeau's war comics this year.
I got a collection called Doonesbury, The War Within: One more Step at a Time. I've been saying for a while now that Trudeau's war comics are exceptionally good, and that he's doing the best work of his career. His stories are informative, full of vet’s issues that deserve recognition and delivered with a combination of skill and well-researched attention to Vet/warrior Culture. It’s a loaded topic to be sure, as the entertainment industry can’t stop administering wet hand jobs to military defense and the increasingly militarized face of law enforcement. Most of the time, he achieves a balance anchored with emotional energy and political outrage countered by a grounded realist's worldview.

BEST NEW TALENT
Various Untitled By Meghan Turbitt, self-published
Meghan mailed me her stuff and it stood out as being weird and self revealing and dirty. I liked them a lot. It’s like she’s channeling all the stuff that appeared in Weirdo done by people you never heard of all the great weird comics that coexisted side by side with luminaries like Crumb, Bagge and Kominsky. I hope she keeps doing it because this stuff deserves to be remembered. One of the standouts is the Conan O'Brien sex comic, with special appearance by Al Gore III. She’s ambitious too and mailed her stuff out to people to get more exposure, and I think all that will pay off.

EVERYTHING ELSE I LOVED
I finally checked out Noah Van Sciver's The Hypo and even just on a technical level, it’s such an accomplishment. I would do well to be half as well at successful defining form, creating backgrounds, adding texture, and balancing darks.

Tom Hart's RL epic continues to be special and extraordinary. It’s shaping into a clearly amazing meditation on the roles of art and tragedy, and the messy complexity of living under the shadow of one while using the illumination of the other to circumvent trauma.

My Dumb Dirty Eyes by Lisa Hanawalt looks great, and I’ve read a lot of it online.  I heard she wants to give me a free copy of this book, it’s a very persistent rumor that I started 3 seconds ago and it keeps on building.

Among all his achievements, my favorite person and publisher Box Brown's I Think Of Demons / Sticky Icky Icky split book from Drippy Bones stood out as my favorite. These two tales read like short fiction and are executed with a quiet Gilbert Hernandez like confidence and power. Looking forward to next year when he will rule all these lists with his much-anticipated Andre book.

Keenan Keller's Galactic Breakdown is an overwrought masterpiece, as bold and crazy as his color pallet. I hope he never stops.

The emasculation of the idols continues in Tom Neely's Henry and Glenn Forever and Ever. This is the comic I'd want to do if he hadn't already done it.

Johnny Ryan's work ethic continues to be a great example for me to follow. He released Prison Pit 4 and 5 this year, though Amazon just told me one came out in late 2012, and the other comes out next week, in 2014. Well, like Pat's Aulisio’s next tattoo says; "Whatever, fuck it."

I also loved Victor Cayro/ Bald Eagle’s Bittersweet Romance, He’s in his own special category, and no one else draws like him.

I found an issue of Bendis' Avengers in the Dollar bin and really liked it, and I found the Hulk issue which guest-stars Rom (#298) at Time Machine on 14th Street and it's great. If you live in NY and love comics and don’t shop there, get there in a hurry.

The rest of the year is spent staring at Harold Gray's Little Orphan Annie and Dick Culkin's Buck Rogers. And that’s it. I worked my ass off in 2013, bring on 2014.
2013 best comics josh bayer