Friday Review - Alone With His Guns 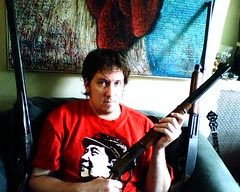 Cassidy travels America and photographs gun owners in their homes with their guns. While the diversity is broad, balanced and fascinating, what is truly compelling is the glimpse at how these gun owners live. Out of the 100 families profiled, 48% of them own pets while only 25% own a book (visible in the pictures). Cassidy asks them a simple question, "Why do you own a gun?" The answers vary from well-reasoned ("protection against zombie uprisings" and "we live in a post-Katrina world") to basic ("it just seems like a good idea") to ridiculous ("to keep the government honest" - um, how's that workin' out for ya?). In fact, 31 people cited freedom, the Constitution, their right/duty as an American citizen (so, I'm assuming these people are pretty pissed off that the Bush Admin. has taken away our right of Habeas Corpus, right?) or the Second Amendment to the Constitution (which actually states: "A well regulated Militia, being necessary to the security of a free State, the right of the people to keep and bear Arms, shall not be infringed." - see that "well regulated Militia" qualifier there?).

48 people said they own guns for security or protection. It's interesting that a majority of these people don't seem to be living in any sort of urban crime hotspots.

Does the book have an agenda? No. Armed America takes a broad look at the 39% - 50% of this country that feel the need to be armed.

BaltimoreGal said…
Ahhh, Pennsylvania, aka Pennsyltucky. Where do I start?

I believe everyone should be armed- with A BIG STICK! Keeps bad people away, yet harder to accidentally kill someone. If the other guy already has a gun, what are the chances you will win in a shootout anyway?
2:54 PM