January 12, 2012
This year, we asked a number of our friends who are also cartoonists and comics publishers and editors what their favorite comics of 2011 were.

Chuck Forsman is the cartoonist series like Snake Oil and The End Of The Fucking World.

I am only naming mini-comics in my list. No particular order.

Nepotism Alert: Some of these people are friends of mine. This tends to happen in a small world.

1. The Dudes by Alex Schubert
For me, this one came out of nowhere. Well, St. Louis actually. This mini-comic made me laugh out loud.  I love Beavis and Butthead. And I am a big fan of swearing while speaking. I love The Dudes. You could love them too.

2. The Gag-Rag by Jeff Lok
Another book packed to the gills with laughs. A frightening and endless desert island gag, comics about God, and the creation of the cat are highlights for me. People need to read more Jeff Lok. Fucking pound on his door in VT and demand a copy.

3. Moose 1-4 by Max de Radigués
Moose inspired me to do a new mini-comic series this year. The simplicity of format and the frequency of release were great, but Max’s impeccable cartooning chops show through. The guy can cartoon! And I mean cartoon like boiling things down to line and design. He plows through and doesn’t look back. Oh and the story is about a teenage kid who gets picks on but keeps seeing this moose pop up in weird places. Get on board of this one. Issue 5 just came out.

4. Kid Mafia by Michael Deforge
I like this comic pretty much for the same reasons I liked The Dudes. There is an attitude that I like that seethes from this comic. Oh and it’s a frickin’ mafia story. More enjoyable than The Sopranos.

5. After the Future by Casey Bohn
Casey Bohn’s favorite cartoonist is Jack Kirby. He draws all of his comics on printer paper with Pitt pens. He is drawing comics for no one. For a comic book about a robot there is a lot of frustration and emotion coded into the pages. I wish there were comics like this.

As people, we continue to organize around belief structures, and then we apply purity tests to allies to make ourselves feel more righteous, more true, superior. But where can this lead? Our 2022 theme is Cults - what is a cult? Is one person's religion another's cult? Can a book club become a cult?  OUR 2022 CULTS READING LIST January - American Cult: A Graphic History Of Religious Cults In America by various February - Cultish: The Language of Fanaticism by Amanda Montell March - I Got a Monster: The Rise and Fall of America's Most Corrupt Police Squad by Baynard Woods / Brandon Soderberg April - The Girls by Emma Cline May - Educated: A Memoir by Tara Westover June - Trust Exercise by Susan Choi July - The Cold Millions by Jess Walter August - Sorrowland by Rivers Solomon September - American Heiress: The Wild Saga of the Kidnapping, Crimes and Trial of Patty Hearst by Jeffrey Toobin October - Universal Harvester by John Darnielle November - Nob
Read more 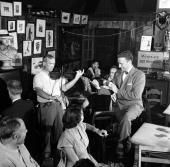 Over the years, Baltimore has seen a lot of bookstores come and go.   40 years ago, the city region had over 25 booksellers. Here's how they were described in a city guide called Bawlamer: An Informal Guide To A Livelier Baltimore from 1974, published by the Citizens Planning and Housing Association. Aquarian Age Bookstore (813 N. Charles St.) As the name would indicate, offered selections in mind-consciousness-body expansion, etc. Baltimore Museum Of Art (Art Museum Drive) Wide selection of art-related books, both hardbound and paperback. The Black Book (2607 W. North Ave.) Carried a large collection of black culture, black history, and related material. Offered fiction and non-fiction, children and adults sections. Book Fair (3121 St. Paul St.) If you were worn out from rummaging through uncatalogued, dust-laden stacks, this neat, well-stocked, well-organized shop may have been just what you were after. Bookyard (817 S. Broadway) If you were rea
Read more